At the facility, Valero was experiencing trips that ultimately led to turbine shutdown episodes during operator attempts to switch from gaseous to liquid fuel or liquid to gaseous fuel during turbine operation. Not only did these unplanned shutdowns cost money, this situation can also be damaging to the equipment. 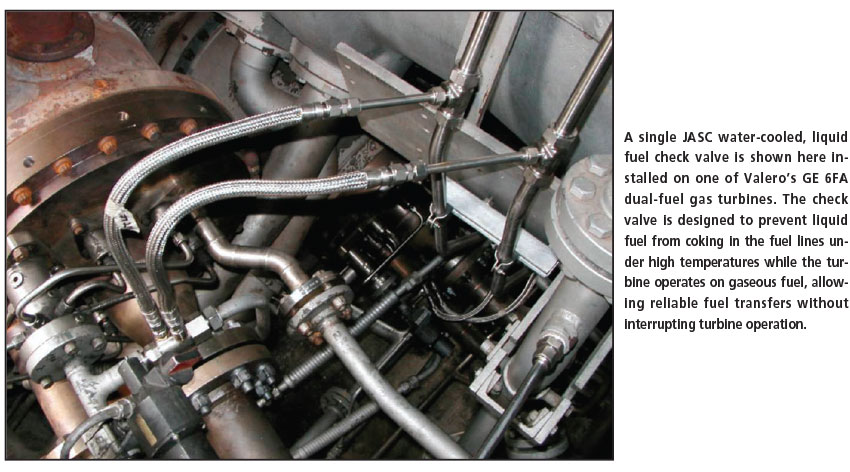 “The start/stop cycle thermal transition is hard on a turbine, and the severity of this cycle is usually intensified because the unplanned trip happens under full power — making it exceptionally hard on the turbine components,” said Schuyler V. McElrath, a spokesman for JASC. “A trip under load is almost always worse than that of a trip under a start-up, or just stopping and starting a turbine under normal conditions.”

In order to accomplish the fuel changeover, operators were required to shut
down the turbines, perform service checks and any needed cleaning of the fuel system components before restarting the turbines on the gaseous fuel and then making the switch to liquid fuel. This situation limited the flexibility of the equipment and made operational planning very important.

To combat the problem, Tempe, Arizona, U.S.A.-based Jansen’s Aircraft
Systems Controls Inc. (JASC) struck a deal with Valero to install six of its
newly introduced water-cooled liquid fuel check valves (WCLFCV), one per can, on one of the facility’s two GE, 6FA dual-fuel gas turbines.

For the test, the turbines were run for approximately 1300 total hours — of which 300 hours were on liquid fuel — and conducted some 50 fuel changeover sequences during turbine operation. At the end of the test, the valves were removed and returned to JASC for inspection.

According to the JASC service report, all six valves were received after use,
visually inspected and photographically recorded. Some of the units showed what JASC referred to as minor discoloration at the fuel inlet and discharge ports, but all were completely free of fuel coking residue. The cooling water inlet and outlet ports of some valves also showed some slight discoloration that appeared to be caused by the heterogeneous mixture of water and carbon-based particles. There appeared to be no extended damage and all the units were determined to be functional. 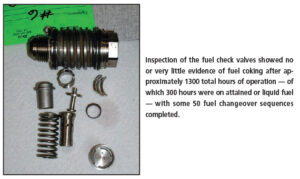 In malfunctioning check valves, when two or more valves fail to seal due to coke or contamination, combustion gas migration through the fuel system heats check valves to 538° or 649°C. Consequently, check valve internal components need to be able to withstand high temperatures, this characteristic offers significant protection for the fuel nozzles. The fuel nozzle orifices, which are very small, can become clogged if material inside the check valve melts and migrates downstream. “The water-cooled check valve keeps the temperature of the liquid fuel inside the check valve well below the coking threshold of 250°F (121°C),” said McElrath. “Keeping the fuel cool prevents the coking from occurring and subsequently allows the check valve to maintain its functionality for very long periods of time.”

After the visual inspection was complete, all valves were tested to JASC’s production acceptance procedure. All units passed the tests and all internal
leakages in the check direction were bubble tight. These results, according to JASC, represent a milestone for liquid fuel check valves in operation on a dualfuel engine for 1300 hours. Heretofore, coking after approximately 100 hours was significant enough to cause check direction leakage and less than desired operation in the flow direction.

After the testing procedure, all six valves were subjected to a teardown
and further visual checks. During these inspections, there was no coke formation and only light discoloration of static parts observed. All the sliding surfaces were found to be completely free of coke and varnish.

In addition, the water-cooled check valves were found to still maintain class
6 seal, preventing backflow of gas in the system. This translates into reliable
liquid fuel starting and prevents large temperature spreads, therefore preventing trips, according to McElrath.

If the stop valve has leakage problems, in extreme cases, pressurization can
occur all the way back to the main fuel storage tank and the transfer can produce catastrophic results, including the destruction of fuel pumps and other system components along with fuel system supply pipes. This pressure spike usually cracks the check valves. They are designed to operate at 8 to 10 bar and the spikes can be as high as 83 bar due to the
capabilities of the fuel pump. Other problems include multiple check valves that will not close, resulting in fuel pressure at the cans not being distributed equally.

“Users usually do not attempt a fuel transfer on the fly,” said McElrath. “They want to avoid the problems and potential trips.”

According to the JASC report, the incorporation of the WCLFCV’s on the Valero turbine, by itself, improved operational reliability of the engine system by approximately 40%.

Since this initial test, Valero elected to have additional valves installed on
the remaining gas turbine in the fleet at this facility. With these valves installed, the application reliability level for fuel switchover has been boosted to the 95% or better range on dual-fuel applications, according to JASC.

“This is a range at which the operator feels comfortable to do the fuel transfer without experiencing a trip,” said McElrath. “In the past, they would shut down the turbines, check the fuel systems and then restart them on liquid. A similar strategy is employed when the switch was made back to gaseous fuel.” 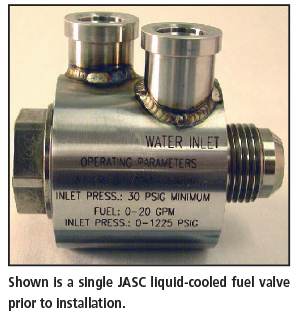 As of recently, the JASC valves at the Valero site have over 300 starts on distillate fuels and more than 200 transfers. More importantly, according to
McElrath, “Valero has also set new industry standards by successfully operating their turbines for intervals of more than 8000 hours without experiencing check valve problems.” According to JASC, the WCLFCVs can be installed on GE gas turbine frame sizes of 5, 6B, 7EA, 7FA, 6FA and 9E. JASC also has valves that are being developed for testing on Siemens equipment.