Prior to installation, the plant had given up on liquid fuel due to issues with coking.

After installation of JASC water cooled liquid fuel check valves and associated hardware, the system was exercised monthly for a year and met expectations. It also has participated successfully in alerts, which requires burning oil.

GRU has several generating units, including a 235-MW coal-fired steam unit, but the Florida city’s DLN-1 equipped, dual-fuel 7EA is the sole focus in this case study. Installed in 1996, it performs 120 -150 starts annually.

Hollandsworth joined Gainesville in August 2002 after working for two major investor-owned utilities in the South. One of many items on his “to-do” list: Get the largest of the utility’s three gas turbines (there are two Frame 5s in addition to the 7EA) at the Deerhaven Generating Station operating reliably on distillate oil.

One of the first things Hollandsworth did was to piece together an operational history for the engine. Here’s what he learned:

Discussions with operations personnel indicated that coking issues soon reappeared. Evidently, the unit would operate on gas for hours with distillate trapped in the liquid fuel system. Later attempts to run on oil would be unsuccessful. It appeared to Hollandsworth that the plant just gave up on liquid fuel at that point and ran on gas.

The foregoing findings got Hollandsworth thinking about the quality of fuel in storage.

Analysis revealed a stability rating of 15, indicating the fuel was unstable. Chemists told him a stability number above 7 is unsatisfactory. Fuel treatment brought the stability rating down to 2, but it just doesn’t stay there— especially in the heat and humidity of Florida. Semi-annual retesting was recommended, with follow-up treatment when necessary.

Additional tests were run on the “satisfactory” fuel to better understand its tolerance for heat. GRU engineers determined that GT compartment temperature can get as high as 300F and wanted to know how long it would take for the fuel to start forming particulates at that temperature. The answer: six hours. That meant any liquid fuel remaining in the system probably would begin to coke during the next run on natural gas.

Hollandsworth had joined the company before the first hot-gas-path inspection in January 2003. One finding: Some secondary fuel-nozzle tubes were completely plugged with carbon deposits. During tuning after the HGP, engineers found some secondary liquid-fuel “pigtail” lines completely plugged with carbon. Fuel lines and nozzles were cleaned in the spring and the plant began testing on liquid fuel again in June. No issues were encountered in the primary circuits, but the water injection system for the secondary circuits had problems—the most obvious was frozen flowmeters attributed to lack of exercise.

An inspection and rehabilitation plan was prepared for the water injection system, but work was postponed for more than a year because personnel were reassigned to address issues associated with forced and scheduled outages of the main coal-fired unit.

Testing resumed on liquid fuel in June 2005, but a high temperature spread at 12 MW with only the primary nozzles in service tripped the unit. Liquid fuel sat in the pigtail lines for almost two years while the unit operated on gas. Hollandsworth said that according to the Mark V timers the 7EA had accumulated only seven hours of operation on liquid fuel since unit installation nine years earlier.

It was clear that proper operation of the liquid fuel system hinged on reducing the exposure time of oil to high heat or reducing the temperature of the oil, or a combination of both.

One idea was to purge oil from the system (end cover to burner front) using nitrogen or atomizing air.

The problem with this approach was the risk of flame out on transfer from gas to oil under load because of empty fuel lines. In addition, there would still be some seals and o-rings in the three-way purge valves exposed to distillate and they would be prone to deterioration and gum-up by particulates.

Hollandsworth began discussions with JASC after speaking to Schuyler McElrath, JASC’s expert on fuel systems for large frame engines, at a user group meeting and came away thinking that water-cooled check valves were a viable solution. They would allow changing fuels under load while holding temperature below the threshold for particulate formation. Experience at other sites confirmed this.

GRU purchased the water-cooled check valves, purge-air check valves, tubing, and other components recommended by JASC to modify the liquid-fuel system during the combustor inspection planned for January 2008.

It’s important to recognize that the switch to the JASC solution was not a matter of just cutting out a few valves, welding in some new ones, and hooking up water supply and return lines. Also needed was OEM support to modify the Mark V controls from three-way purge-valve operation to water-cooled liquid-fuel check valve operation.

Barrera said this was his first experience with the JASC solution. He rated the project “challenging,” primarily because of the controls-logic changes necessary, a different basket of plumbing hardware to deal with, prefab effort, fuel system cleaning, etc.

Water for cooling the check valves comes off the closed cooling-water system (70% water, 30% glycol), which also supplies the lube-oil cooler and other auxiliaries—including the small heat exchanger that reduces the temperature of compressor discharge air for purge, atomizing, and fuel-nozzle cooling purposes.

One inch cooling-water supply and return manifolds were installed (Fig A) to serve all combustors in parallel. Fig B shows that cooling water flows to the primary fuel nozzle first and then to the secondary nozzle (in series).

A water-cooled check valve, as installed, is in Fig C, with a drawing to illustrate how the valve works in Fig D. 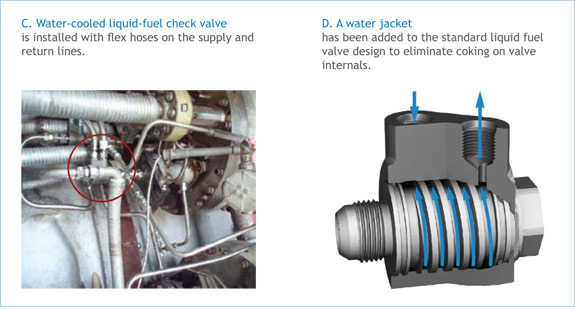 Cleaning of the fuel system required an effort that should not be underestimated, continued Hollandsworth. He said a holistic approach was used to make sure the job was done properly. Hydrolazing was used to cut through coke in fuel lines and remove it from the system. System clean-up took about a week. Truck with necessary equipment is in Fig E, worker protection required in Fig F. Process gets results: Coke removed is in Fig G.

Among the problems identified:

All work complete, recommissioning of the liquid fuel system was reasonably straight-forward. The system has been exercised monthly for the last year and has met expectations. It also has participated successfully in alerts, which requires burning oil.

GRU’s standard 30-min test: Unit is started on gas, switched to oil and run up to at least 60 MW, allowing check-out of the primary and secondary purge-air and water-injection systems. Then load is reduced and the unit transferred back to natural gas for shutdown. After shutdown, atomizing air and check-valve cooling water continue to run for eight hours. 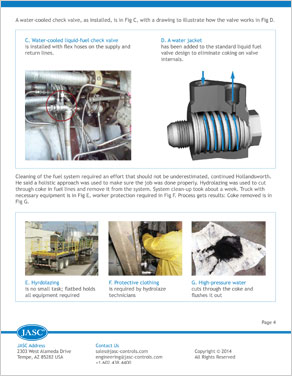 Would you like to improve the reliability of your dual fuel engine?

JASC can help. JASC has improved success rates to nearly 100% for dual fuel gas turbine engines throughout the world for over two decades.

For a limited time, JASC is offering free one-on-one consultations for dual fuel engine operators & owners to help them improve their engine's performance and reliability.

The information you submit to us will be handled and protected as set out in our Privacy Policy.